16 INT. RESIDENCE. NIGHT
LOCK-OFF CLOSE UP: FLOOR
It is evening. The sun has gone down but it is not dark yet. We hear the apartment door open and close, followed by the lights being turned on and the sound of keys being placed on a flat hard wooden surface. LISA places her shoes where the camera has been fixed all this time.

MEDIUM WIDE: CAPTURING MOST OF THE APARTMENT
LISA walks deeper into the room. Her back is towards the camera. She places today's take-out bag on the counter. Her place looks a bit worn.

LISA (VOICEOVER)
I'm so proud of him. It must be the
absolute loneliest journey anyone
can possibly imagine. Drifting
through darkness by yourself,
uncertain what awaits you at the
other end.

Even though the authorities managed to reinstate the electricity, unfortunately there is still no running water. Against all hope LISA checks anyway but the faucet remains dry.

LISA (VOICEOVER) (cont'd)
Today, I am selfish enough to admit
I should never have let him go. If
I had just one more chance, I would
beg him to stay with me and the
hardships of our unknown world,
instead of chasing after the
answers in an over-sized universe.

She gets a gallon bottle of water out and fills a bowl with the over-priced filtered destilled water in order to wash her face. She has just finished and is right in the middle of looking for a towel when her iPad makes an unfamiliar beeping noise.

LISA freezes, backs up against the nearest wall, and slumps down onto the floor, first staring into space, then resting her head against her knees. The display is showing JOHN's full name accompanied by the letters "M.I.A." next to it.

LISA (VOICEOVER)
Seven years is a long time. Almost
enough to move on, including a few
failed attempts of forcing myself
to forget. Just when I thought I
was finally able to ignore what
happiness felt like. 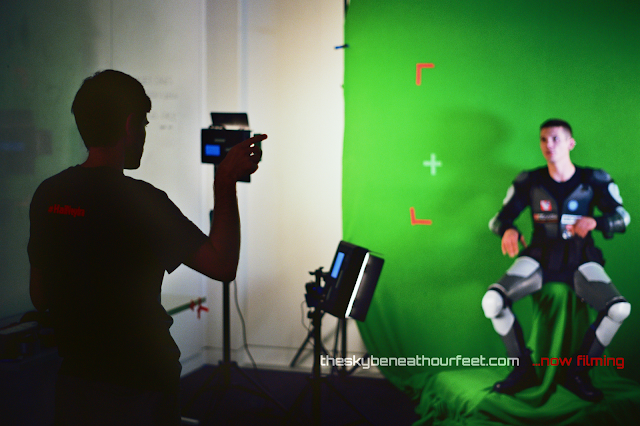 
JOHN (VOICEOVER)
Dear Lisa, (pause) I'll probably be
halfway down our solar system by
the time you get this.

MEDIUM CLOSE UP: OVER THE SHOULDER
From inside the glass elevator we see the reflection of JOHN's face and the estonishing Gliese landscape, as we descend to the planet's surface.

LONG SHOT: BOTTOM OF SPACE ELEVATOR ENTRANCE
We see JOHN exiting and stopping for another moment to take it all in.


JOHN (VOICEOVER) (cont'd)
It is so pretty on Gliese. I wish
you could see it. Not through a
screen but in person. By my side.

JOHN (VOICEOVER) (cont'd)
Earth looks so... civilized... from
space. Like there's some kind of
logic to it all. It's all so clear.
But you get down to the surface and
nothing makes sense anymore.

JOHN sits down on the grass, gets his iPad out, and starts typing.
JOHN (VOICEOVER) (cont'd)
All the history of human life has
been a struggle between wisdom and
stupidity.

LOCK-OFF CLOSE UP: CAMERA FIXED ON KEYS AS THEY LAY ON A FLAT HARD WOODEN SURFACE WITH WELL COORDINATED BUT SEEMINGLY RANDOM CLUTTER AROUND IT.
Female hand grabs keys from screen right to screen left.

WIDE: PROFILE VIEW OF LISA. LISA stands at ledge, staring out into nothing in particular.

LISA (VOICEOVER)
When I read his messages, I
envisioned him all alone. And it
hurt.
MEDIUM OVER THE SHOULDER: OVERLOOKING DOWNTOWN ENVIRONMENT WITH SOME ADVERTISEMENTS AND FUTURISTIC DISPLAYS BUT QUITE A LOT OF THE CITY STILL IN RUINS. IT IS EARLY MORNING WITH THE SUN STARTING TO COME OUT AND THE LIGHTS STILL BEING ON.
LISA (VOICEOVER)
I stared at those words so
intensely it was as if I could feel
him through space and time.